One Day All Training Agencies Will Offer a Comprehensive On Line Training System, Until Then There Is RAID

Are you worried about not having books? Encarta was not worried about Encyclopaedia Brittanica. Go Pro probably don't give Kodak a second thought and can anyone still remember Polaroid?

All the major agencies are trying to work out how they transition from an outdated model into the modern world, Imagine working at Kodak when digital hit the market, why did they not just adapt? Simple their model was fixed and changing it costs a fortune so they just keep playing at the fringes hoping something would change until it was too late.

Imagine owning a book store franchise or having a store filled with film cameras when digital hit.

You would not want to be in that position would you?

What is a Google and what is a Facebook? I know the Amazon is a jungle and Kindle is something you start a fire with right?

I guess if you had a bunch of money invested in a book store ten years ago you will wish you took more notice when someone said, these technologies will put you out of business.

But I have never heard of these brands you might say.

History shows that companies rarely bridge from old technologies to new and it's the new companies in this millennium that quickly become the brands of choice.

Charles Darwin said "it is not the strongest of the species that survives or the most intelligent, it is the one most readily adaptable to change".

We understand change is always difficult but it is also inevitable. All training agencies want to go digital, it's not the technology that holds them back it's the investment they have in old technology. Clinging to old technologies and old brands will hold you back.

We ask you to join our team and do what every successful business does , be ahead of the pack. See our YEAR IN REVIEW CLICK HERE

The innovative and comprehensive RAID system of diver training is the future.

Rebreather Association of International Divers, first developed training for rebreathers. Due to demand we extended our programmes to include open circuit courses.

RAID training is a culmination of years of experience gained in the SCUBA training industry and assimilation of the best skill development from across the board combined and presented with the very latest technology to provide unmatched quality control SCUBA diver training.

The RAID training is presented to the student through the internet on a systems developed platform after careful study of long distance learn techniques from Australia to the USA. The system is now the most comprehensive e-learning programme in the world.

The system has been designed to integrate academic learning with practical facilitator lead development. The progressive learning system incorporates quality control throughout and interlinks the training facility with the student and instructor, providing a structure which ensures stands control and transparency.

Within the time it has been active in the diver training market RAID has grown more than any other developing agency over a similar period. It has proven to be simple and effective to use from the students', instructors and dive centres' point of views. RAID is a DIVE CENTRE based training agency.

Beyond the systems design, which makes RAID diver training unique, with substantial and comprehensive detailed diver training course materials, which can only be assembled and written after years of diving experience. For example;

There are an estimated 167 edited diver training manuals consisting of over 4000 pages of editorial information, reinforcement with over 12000 questions and answers. Even though RAID has the latest on-line systems design, it is the course content that ensures RAID is the largest and comprehensive on-line training diver training programme in the world.

RSTC: Rebreather Association of International Divers (RAID) is a Member. We recognize that all RSTC members meet or exceed RSTC Minimum Training Standards

RTC: The Rebreather Training Council. RAID is a member.

RAID is accepted by The UK Health and Safety Executive as an approved provider.

Paul Toomer
President
Paul is a force of nature in the diving world and his unique approach to training is legendary. Since he became a diving professional, Paul has reached the pinnacle of the world's leading diver training agencies; teaching divers, instructors and instructor trainers. When it comes to caves, wrecks and rebreathers, Paul has been there and done that all over the world. An avid writer and presenter, his contributions include articles for various dive magazines and formal presentations at training agency member events, DEMA, OZTek, EuroTek, TekCamp, the British Scuba Industry Trade Association, the London International Dive Show and many more.
After a decade of teaching rebreather and technical courses, Paul was appointed International Director of Technical Training for SSI. Now President at RAID, Paul brings a wealth of real world experience to his position. 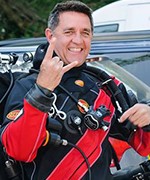 Barry Coleman
RAID Founder & Director of RAID IT & Standards. Barry Coleman started diving in the late 70s. By the early 90s Barry started rebreather diving and in 2001 conceptualised the design of a recreational rebreather. Working closely with the design team at Poseidon, the Mk VI Discovery Rebreather was born and brought to market in 2007. To support the diver training required for Mk VI, Barry founded and launched RAID.
Since then Barry has continued to research remote learning models and pioneered the development of RAID E Training programs across the full range of recreational diving activities now offered by RAID. Barry is a sort after speaker at dive conventions and an advocate for the protection of the oceans.

Steve has, for many years, promoted standardized risk management and following established best practices at all levels of diving. He is a best-selling author, had been principle writer for several technical diving textbooks (including RAID's cave-diving programs) and contributes regular columns for several diving journals and magazines. He is a popular speaker and has presented seminars and workshops on these and related topics in North America, Europe, Asia and the U.K.

Steve has served on the Training Advisory Panel and was a staff IT for TDI/SDI/ERDI; his is a Fellow of the Royal Canadian Geographical Society and has earned several industry awards. In addition to diver safety, he is an advocate for the preservation, protection and appreciation of the marine and karst environments.

He brings more than 30 years of experience to the RAID team.

Col McKenzie
Col was the ultimate driving force responsible for successfully taking SSI to Australia and South East Asia, culminating in establishing successful SSI businesses in Thailand, Indonesia, Malaysia and the Philippines. A very capable administrator and financial controller, Col was previously the President of Dive Queensland for 3 years and their Treasurer for a further 4 years.
Col has also been an active participant in the marine tourism industry for the last 32 years and is currently the Executive Director of the Association of Marine Park Tourism Operators (Great Barrier Reef), a position he has held for more than 10 years. He represents the marine tourism industry on 38 different boards, forums and / or committees.
The recipient of several dive industry awards Col brings over 40 years of experience in the dive industry to the RAID team.

Mark Mc Crum
Recreational Training Manager. Mark started a diving and training career while in the Royal Australian Air Force. As an Air Force trainer he gained skills in training that would lead to an extensive career in training for the dive industry. Mark started with PADI in 1984 and became a dive professional within the first 3 years of diving. This started a 30 year diving journey that has taken him around the world. Mark has been involved in diver training at the highest level and has held qualifications in PADI, SSI and now RAID.
For the last 6 years Mark has been in the role of International Training Director and General Manager for SSI in Australasia. He has extensive background in dive shop business training having been involved in the training of sales skills, customer service, equipment servicing and customer relationship functions for more than 20 years.
Marks experience comes from having been a part of almost every area of the dive industry. He has worked in diver training, wholesale, retail, resort operations, dive training agencies and Australian Recognised Training Organisations. Most recently he was a finalist for the Service Skills Australia Excellence Award for industry collaboration in training with a self authored Marine Research Diver Programme.
Having been appointed Recreational Training Director for RAID he brings 3 decades of dive industry experience to the organization.

Looking for a dive center?

Are you looking for a Dive Center to provide you with assistance, advice or just to see who is close to your search area? Use the map below to search.